How Do I Get Where YOU Are Going – When There Is No Map?

I’m having a kind of surreal experience these days. Did I create the game Exit Matters just so I could understand what my dad is going through in his end-of-life process?

Driving home from the Dorothy Ley Hospice day program where my dad is an active participant, I felt a rare moment of pure knowing that I am on my purposeful path. Bringing the game into the day program with fellow end-of-life travellers was both a vision I’ve had and an honour. Seeing the community that he is now a part of was a lovely gift – normally family members aren’t invited in to the group in that way.

Forging Their Own Map

There is still a lot of mystery for me even having had multiple conversations with my dad about his dying process. This time at the hospice gave me a peek into an experience that is not mine yet, but will be some day. These are people forging their won map to a well-travelled destination (last I checked, we are all heading there) that can only truly be navigated individually. So how do I, as a loved now, support and learn and even try to follow along on this journey so my dad is not alone? And is it even my place to try?

…we are not totally alone in our journey, even if it is one that no one returns from. We can leave, what I call, value-able bread crumbs.

At a recent talk, I shared a lesson I have learned from playing Exit Matters with hundreds of open and courageous people willing to “go there” even for the hour plus it takes to play the game. One of the comments I hear a lot is that people are “hoping” that family members or friends will know what they want during their dying process and beyond. Even if those loved ones who may have to make those decisions aren’t really talking about it – with each other or with the person themselves. My lesson spoke to the risk of that hope and what I believe is a missed opportunity.

Sharing what matters to you does not necessarily involved a step-by-step, buttoned down, all things considered and accounted for type plan. Even if we do the research to figure out what are the likely options and directions our dying process might take. There is no map that we can all follow. Just like in birth, where I for one dutifully made up a birth plan including a lovely home birth that got thrown out with the warm water in my bath tub once things started to happen differently then I had envisioned.

What Happens When There is No Map?

Wanting control during these transitional experiences is one way we try to manage change. It’s totally natural, normal and necessary to feel fear when we don’t know where we are going and there is no map. However we are not totally alone in our journey, even if it is one that no one returns from. We can leave what I call value-able bread crumbs. Getting clear for ourselves and being able to help others to see what are the really, really significant aspects or ideals that we hold dear to our heart is such a huge gift we can give to those who are trying to walk the end-of-life journey with us as far as they can. It may not seem like much, but they are like little shiny gemstones that light up a path that is both ancient and new to each pair of feet that walk it.

It may seem like a simple thing, but carrying out his values and wishes is a powerful way to honour the man he is and the impact he has had in the world. 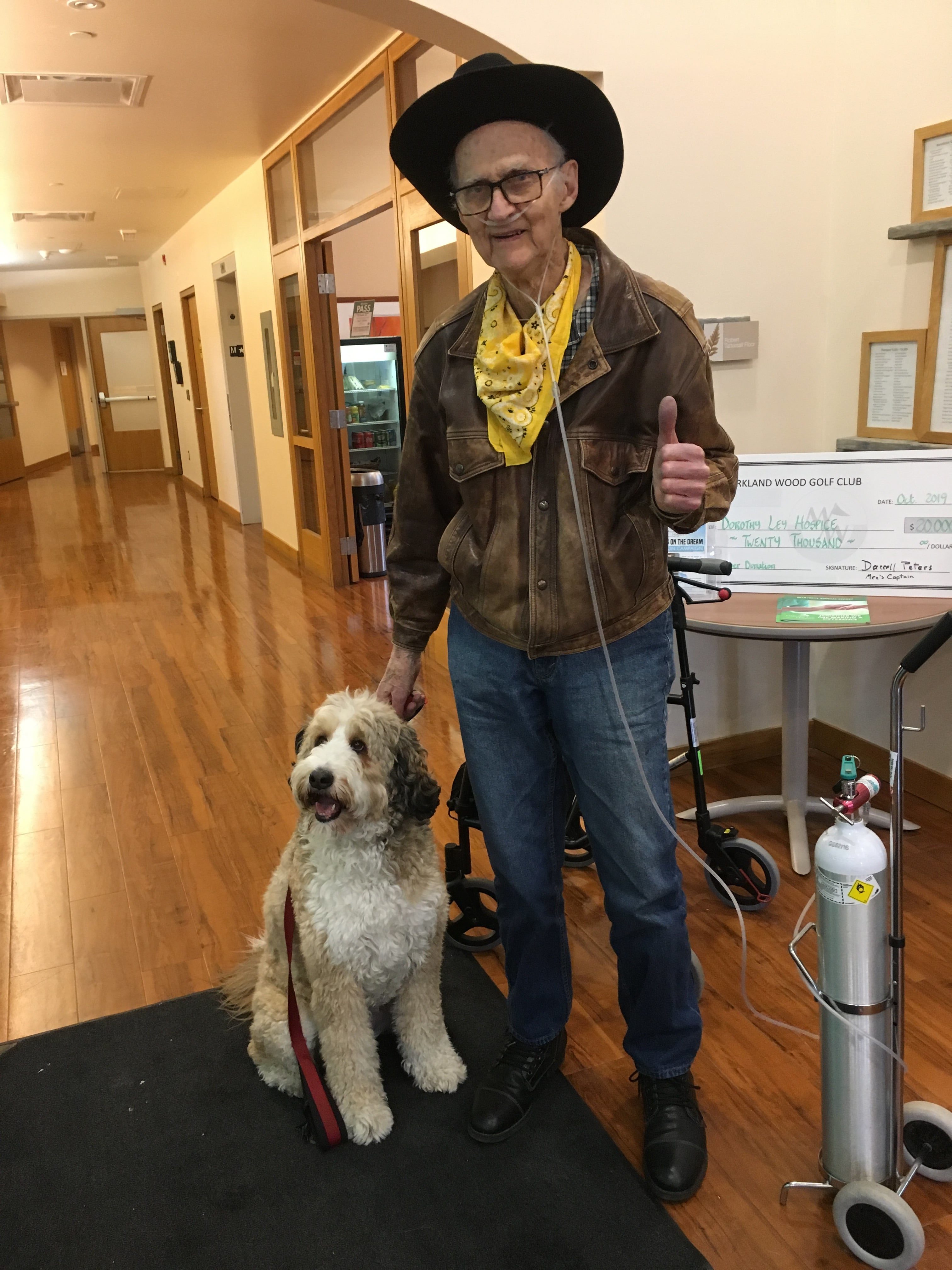 My dad with Sadie

As one example of these shiny “bread crumbs” I’ll turn to my dad and his love of dogs. I am surprised to look back and see that I was the one begging annually at Christmas for a dog (and later a “real dog” after I had my fill of stuffed dogs). When we finally got a dog, both the first for our family and my dad, he was totally smitten. Although he only had the one dog in his life, he became the patron of dogs, dog walking, dog sitting and now dog-stuffing with treats in our neighbourhood. It’s a good day for him when he can give a dog a treat (or ten). So I know that any time I can bring my dog, or anyone’s dogs for that matter, for a visit to my dad, it will lift his day. Even when he’s in the hospital. And now Sadie the dog is the benefactor of his treats at his hospice day program.

It will also be something we can facilitate during his active dying process. Being at home or in a hospice will help with that since dogs are welcome there. Even after his death, acknowledging his love of treating dogs can be honoured by handing out treats at his funeral, so that others may spread his love and generosity with dogs in their own neighbourhoods.

Value-able bread crumbs may be no map, but they can still help us find our way. It may seem like a simple thing, but carrying out dad’s values and wishes is a powerful way to honour the man he is and the impact he has had in the world. Wouldn’t we all want that after we are gone?

My dad may be forging ahead, creating his own path, maybe even following the bread crumbs of his own ancestors. By it’s very nature, death is something we all share but cannot join in ’till it is our turn. It is both universal and individual. So maybe one of the greatest gifts we can leave for those left behind is a trail of clues – not to where we have gone, but to how to walk our own path.

Are you worried about being a burden to someone? Do you know of someone you’d like to start a conversation with about their wishes?

Join us on November 19th for our workshop – Easing the Burden  where you can ask questions and discuss & process your feelings around the end of life (and death) you wish to have. It’s also a time to examine how to have these conversations with our families and advocate for ourselves regarding our personal desires around medical care, assisted living, our wills, and our funerals.

We look forward to seeing you!

Surrounded by the beautiful reds and golds on the trees as I drove home from a successful expo, I should have been feeling as vibrant as the colours I was seeing.

END_OF_DOCUMENT_TOKEN_TO_BE_REPLACED

In the Life Training

I have somewhat gently introduced my own family to my passion for thinking and talking about death. I’ve had them play the Exit Matters game back when…

END_OF_DOCUMENT_TOKEN_TO_BE_REPLACED

I am starting to hear more and more that people don’t want a funeral they want a celebration of life, and they don’t want anyone to be sad at their event, they want them to feel happy and to feel more like a party.

END_OF_DOCUMENT_TOKEN_TO_BE_REPLACED

My passion is to create innovative and engaging ways to open up our thinking and talking about what matters to us - in our life and our death.